Raul Murillo, also known as El Pozolero, has always had difficulty understanding the difference between right and wrong. Socially awkward and living as a hermit, he has the mind of a child. He used to work in construction before he lost his job and was recruited by the cartel. He was taught how to dissolve bodies and discovered that he had a strong constitution for it. Due to the activities of the Santa Blanca Cartel, there are always bodies that need to disappear. Wearing latex gloves and a gas mask, El Pozolero places the bodies in oil drums with caustic soda (sodium hydroxide) then stirs them until they turn to liquid. Then, he dumps the “stew” and crushes up the remaining evidence: the bones and teeth.

In game, El Pozolero is quite a nervous character. If he sees a Ghost coming at him, he will certainly try to run to save his life rather than directly assaulting the player, hence the interest in capturing him undetected. According to the Narrative Director Sam Strachman,

"What’s crazy about El Pozolero is that you have this guy who dissolves dead bodies for a living…yet he truly doesn’t believe he’s doing anything bad. He would never, ever hurt or kill anyone. He just melts them after they’re dead." [1] 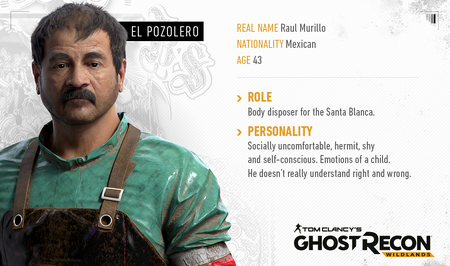