Back to page
View source

Despite his major role in the development of the Santa Blanca Cartel in Bolivia, little is known about the history of El Sueño. Even his real name is unknown. Only the legend survives: a little boy leaving his Mexican village at the age of 11 with the ambition of becoming a king.

El Sueño started at the age of 12 as a sicario (hitman) for the cartel. A few years later, he had a vision of La Tierra Sagrada, the Holy Land. After the recruitment of Nidia Flores, one of the most prominent smuggling specialists, he decided to move the Santa Blanca Cartel to the very source of its trafficking: Bolivia.

His ambition was to show his people “the truth” he received from the Santa Muerte. He wrote a new bible for his followers telling the blessed story of the Santa Blanca Cartel.

Brutal and religious, El Sueño is a brilliant leader. Insightful and reflective, he instills loyalty in those he meets. The cartel builds schools and churches, and offers jobs for those who follow their leader. However, none should ever try to challenge him.

When he first brought Santa Blanca to Bolivia, El Sueño offered the civilians a choice: either they work for him, or he will kill everyone they love.

El Sueño is a man of many contradictions: religious and violent, charitable and brutal. A man who openly admits to committing mass murder but claims he never lies about anything. Ever. 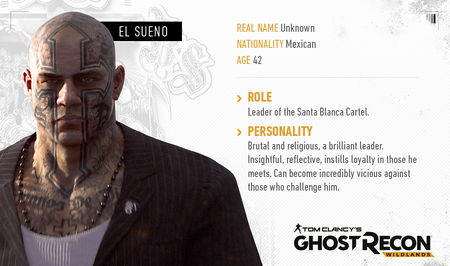