Throughout the game he will assist you with rebel support and thank the player for his assistance upon completing a rebel side op.

When you have destabilized at least two organisations (smuggling, influence, security, and production), Pac Katari will claim that one of his rebels has a location on El Sueno. When you arrive the rebel is dead and Bowman is under attack. Bowman claims Pac Katari has betrayed her and the team. Then you have to arrive at El Sueno's mausoleum to confront him. El Sueno will turn around holding Pac Katari's head and lob it at the player. 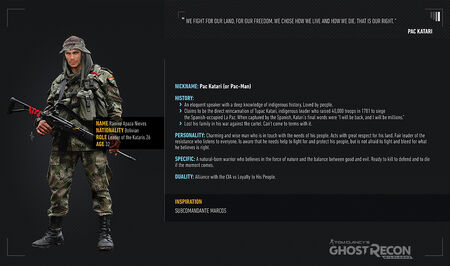