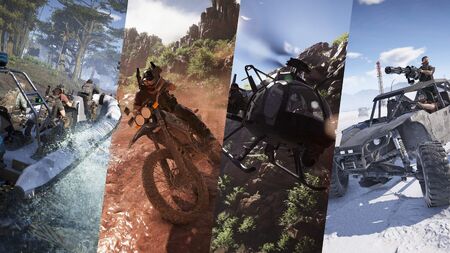 In Tom Clancy’s Ghost Recon Wildlands, there's more than 60 vehicle options to aid you in crossing the vast, open world of Bolivia. An uninterrupted road network spans the entire country. As asphalt roads only link large cities, most roads in Bolivia are dirt and require off-road driving. Of course, not all vehicles are designed for this purpose. Some of the roads are also among the world’s most dangerous, such as the Death Road located in the Yungas. Roads in the game are only one of the ways to reach your objectives. You also can decide to cross rivers, lakes, or even mountains. Whether you prefer to use land, air, or water vehicles is up to you to decide.

There are a large array of Vehicles, including off-road Buggies, AMVs, APCs, and military Bikes or with air vehicles via airspace. With Gunships, Transports, and special operations Helicopters, Unidad patrols the world with an omniscient presence. In game, depending on its strength and influence, Unidad will send troops on both air and land patrols. But be careful, as killing Unidad troops increase their vigilance and presence across the world, and you may end up in a terrible situation.

Being part of a living open world, your Ghosts will frequently encounter civilians following their own schedules and crossing the country with their old Asian-model cars, vans, or even SUVs. Motorbikes also are a fine choice for many inhabitants to travel through the various ecosystems of the map while passing through local industries, businesses, or towns.

In the meantime, the Santa Blanca Cartel, your main enemy in Ghost Recon Wildlands, is prepared for any occasion and favors pickups or armored SUVs to chase the Ghosts or provide reinforcements. The cartel also has some unique vehicles that you may come across while exploring the world, such as supercars or the infamous Killdozer. The Unidad, the local military force acting on the cartel payroll, uses a large and impressive array of vehicles to stay in control of the country. This includes for instance off-road Buggies, Armored Vehicles, or military Bikes. Additionally, some rare or unexpected vehicles are also available for you to find along your journey.

Crossing Bolivia’s mountains can be a challenge. However, this is made easier by using one of the many air vehicles available. In order to transport cocaine in the most efficient way, the Santa Blanca Cartel uses small airplanes and Helicopters that you can confiscate for your convenience. However, Unidad truly dominates the airspace. If you commit any offense against them, they will come after you with increasing force. Before you know it, they can deploy helicopter Transports to provide reinforcement or even call in rocket support. You have to be cautious of their massive strike force!

There are other helicopters the Ghosts can find that are used for transporting resources. If the Ghosts find one of these helicopters, they not only can benefit from the air transport, but also take the resources in order to help out the rebel forces.

There will be times when you’ll find yourself needing to reach an island or cross lakes and rivers. Of course, you will be able to find some fishing boats around the villages, but they might not be sufficient enough to overtake cartel boats and their firepower. Floating laboratories, as well as special operations RIB Boats or Gunboats, can also be found on the waters of Bolivia. 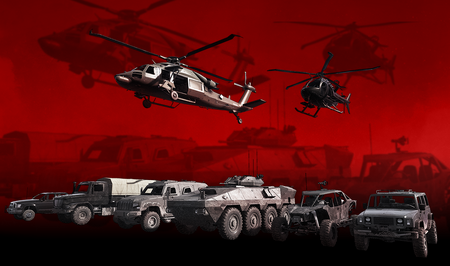